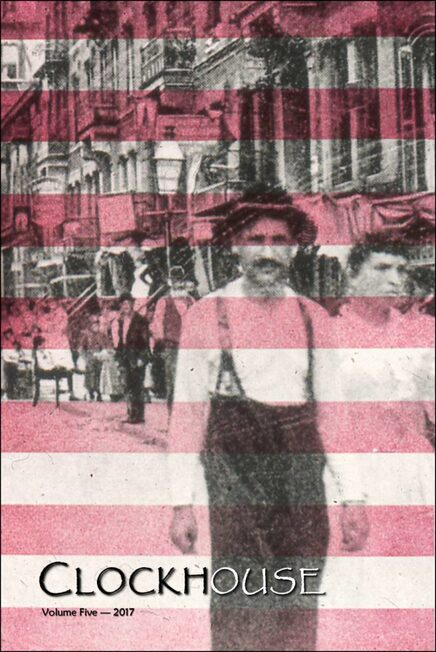 A Note from the Editorial Director: Danger Signs

That afternoon, we went to Devil’s Nose, a large bluff that juts off western New York into Lake Ontario. When I say we, I mean Molly, my German shepherd, and me. I’d heard the rumors, read the tales about Devil’s Nose since I was little: a lovers’ lane, the site of boat tragedies dating back to the 1930s, a hang out—a death trap—for 70s, 80s, 90s high school and college students who fell from what’s known as the highest point for miles. It’s the largest, craggiest finger of land into the lake.

It started with Facebook. And rain. So much rain this spring that the whole Rochester area was on high alert in an ongoing flood watch. Over the ticker on the local news station—a community college “taking a stand” against anti-Semitism after a rash of hate crimes, a “shining star” fatally shot on Rochester’s northwest side, the International Joint Commission “balancing” water levels between New York and Canada, area flood warning for Monroe County. High alert the way we’ve all been for months now, but really the only thing that’s changed at my house ten miles from the lake is the amount of daylight our Wellies and umbrellas have seen. That is, until a Facebook post by someone whose name rarely shows in my feed: Devil’s Nose gone?

It seemed the perfect opportunity for me to venture out—I’d visited Troutburg, an old-time resort alongside Devil’s Nose in February when the lake should have been iced over but was grey and frothy. I was continuing research for a novel about a boy who’d been missing for 15 years, rumored to have been suicidal, last seen at Devil’s Nose. What better place to go than into the dark? As Virginia Woolf said, “The future is dark, which is the best thing the future can be, I think.” Artists know this, that perplexing places are precious settings for growth, that curiosity is at the trunk of knowledge. Writers say it all the time: write your worst fears, write your hardest realities, write your worst fears becoming your hardest realities. Venture toward the mess. As Adrienne Rich wrote, dive “into the wreck.”

The day was sunny after weeks of rain. The bank of the beach had waned since last summer’s very hot, very dry temperament. There were at least twenty signs pegged along my walk up to Devil’s Nose:

But each time I saw a sign, I saw yet another sign farther out, which told me I could ignore the first sign—someone had known I’d venture forth. “Warning” does not mean the same as “watch,” as I’d learned during last week’s tornado warning.

A saw-horse presented itself.
AREA CLOSED, it read.

But still, there were more signs ahead. And Molly pulled, so we went. The path was worn, which meant that many people had been there, too—we knew of them from their tragic news stories. The waves crashed louder here though the height of the bluff separated us farther from the beach than safer spaces. We’d run into an old man with his golden retriever Sasha. He’d said Devil’s Nose was of course still there, gesturing with a leash toward the mound of rock and weeds and branches, but so much had eroded since he’d moved here in the 60s.

In class this semester, my students ventured past trigger warnings into the world of micro-aggressions and wounds still tender until it seemed like we stood at a cliff at our own peril. We discussed the trials of campus race relations, how hate speech had been scrawled on the white boards in dorms and how dry-erase markers didn’t really erase, how we can’t ignore our shameful pasts for worry that we forget the dark, that we deny the value of those lessons learned with lives lost. There is value in the hard spaces, and if we never venture toward each other, those barriers can never bring us together. Sometimes it becomes all of us side by side, looking at some vast dark. Rebecca Solnit says of these lessons: “It’s the job of writers and explorers to see more, to travel light when it comes to preconception, to go into the dark with their eyes open.” She writes for The New Yorker about how essential it is to embrace Woolf’s in-sistence: imagine “yourself in another place, as another person.”

The 2017 issue of Clockhouse seeks to understand, struggles through experience, gains ground in meeting others in the human condition, where we’re all in everything together. The Folio curated by Aimee Liu revenges with beauty, explores “earned wisdom” of the human spirit: Diana Wagman’s “Small World” depicts the hope a nurse finds after accompanying her patient on a pilgrimage to Dis-neyland, Paisley Rekdal’s “Atlas Moth” uses myth and history to alight the life of a grown man with Down syndrome.

Cynthia Bond discusses her novel Ruby and the stories of the black experience that she is “honored to tell.” Ira Sukrungruang’s “Because, the Ferguson Verdict” explores how words and guns and accents and skin and every god might separate us, but our “body of history” joins us. This issue’s poetry follows Clifford Thompson’s meandering identity in the face of the Black Lives Matter movement, the intersectionality of Sabine Bradley’s “I did it to a man,” and the journey of Holly Karapetkova’s “La Bestia” to America, leaving “imprints of . . . careful fingers.” Those in Richard Chin’s “137th Street” philosophize our duty to each other on the edge of a subway platform. The writers in this issue explore life beyond the limits of our individual skins.

When Molly and I emerged from Devil’s Nose having made it to the chicken wire where there were no signs beyond, I had already felt a sense of having turned around too soon, having abandoned some important knowledge before it’d sunken in, before I’d found the mind of a teenager seeking the end of his life. Had I abandoned the 15-year-old character, who, in my mind, threatens to become an amalgamation of both my sons? Of all our children, those students in my classroom, those born centuries ago or a week from now? I had already decided I would go back and venture further. And I will. If Americans have learned anything in these past months, in this past year, and years, and hundreds of years, it’s the importance of working harder to see someone else’s reality, pushing through our own experiences to see another’s.

In reading Clockhouse 2017, you will be compelled to break these boundaries, to connect regardless of lingering disconnect, to unite, to inspire humanity, to find power in revenging with beauty against those who ignore the dark. To stare with the rest of us into the unlimits.