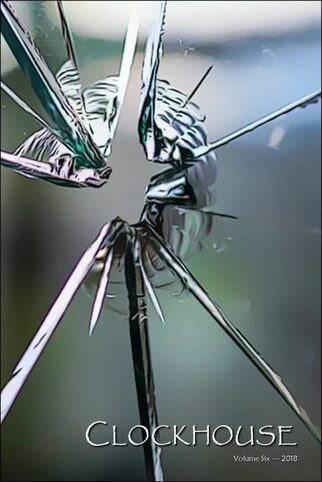 Contributors
Chad B. Anderson is a writer and editor living in Washington, D.C. Born and raised in Virginia’s Shenandoah Valley, he earned his B.A. from University of Virginia and his M.F.A. in creative writing from Indiana University, where he served as fiction editor for Indiana Review. He has been a resident at the Ledig House International Writers’ Colony, and his fiction is published in Salamander, Black Warrior Review, Nimrod International Journal, and The Best American Short Stories 2017. He has also published nonfiction with The Hairsplitter and several articles and reports on higher education.

John F. Buckley lives in Ann Arbor, Michigan with his wife. His publications include various poems, two chapbooks, the collection Sky Sandwiches, and with Martin Ott, Poets’ Guide to America and Yankee Broadcast Network. His website is http://johnfbuckley.net/. He is the fiction editor for the journal Third Wednesday.

Nikia Chaney is the current Inlandia Literary Laureate (2016-2018). She is the author of us mouth (2018, University of Hell Press) and two chapbooks, Sis Fuss (2012, Orange Monkey Publishing) and ladies, please (2012, Dancing Girl Press). She is founding editor of shufpoetry, an online journal for experimental poetry, and founding editor of Jamii Publishing, a publishing imprint dedicated to fostering community among poets and writers. She has won grants and fellowships from the Barbara Demings Fund for Women, and Cave Canem. Her poetry has been published in Sugarhouse Review, 491, Iowa Review, Vinyl, Pearl, Welter, and Saranac.

Barbara Daniels’s book Rose Fever was published by WordTech Press and her chapbooks Black Sails, Quinn & Marie, and Moon Kitchen by Casa de Cinco Hermanas Press. Her poetry has appeared in Prairie Schooner, WomenArts, Mid-American Review, The Literary Review, and many other journals. She received three Individual Artist Fellowships from the New Jersey State Council on the Arts.

Juan Delgado earned an MFA from the University of California, Irvine, where he was a Regents Fellow. Delgado’s collections of poetry are Green Web (1994), selected by poet Dara Weir for the Contemporary Poetry Prize at the University of Georgia; El Campo (1998); and A Rush of Hands (2003). His most recent book, Vital Signs (2013), won the American Book Award, given by the Before Columbus Foundation. He is Professor Emeritus for the English Department at California State University, San Bernardino, where he’s chaired a couple of departments and served as Interim Provost and Vice President of Academic Affairs.

Being a native Floridian and current resident, Michelle Lizet Flores is happy to have returned to the land where trees don’t sleep. A graduate of FSU and NYU creative writing programs, she currently works as a fifth grade reading teacher where she fosters the next generation of American writers. She has been published in magazines such as Badlands, The Miami Rail, and Noble/Gas QTRLY.

Soma Mei Sheng Frazier is an East Coast native living in the San Francisco Bay Area. She has served as a 2017 San Francisco Library Laureate, and in 2018 will adjudicate the Tom Howard/Margaret Reid Poetry Contest. Frazier is Chair of English and the Humanities at Cogswell College, where she founded www.cogzine.com. Her award-winning fiction chapbooks, Salve (Nomadic Press) and Collateral Damage: A Triptych (RopeWalk Press), have earned praise from Nikki Giovanni, Daniel Handler, Molly Giles, and others. She is nose-to-grindstone on a novel and a screenplay. You can find her at www.somafrazier.com.

Cal Freeman was born and raised in Detroit, Michigan. He is the author of the books Brother Of Leaving (Marick Press) and Fight Songs (Eyewear Publishing). His writing has appeared in many journals including New Orleans Review, Passages North, The Journal, Commonweal, Drunken Boat, and The Poetry Review. He is a recipient of The Devine Poetry Fellowship (judged by Terrance Hayes); he has also been nominated for multiple Pushcart Prizes in both poetry and creative nonfiction. He regularly reviews collections of poetry for the radio program Stateside on Michigan Public Radio. He currently lives in Dearborn, Michigan and teaches at Oakland University.

Melanie Haney is a writer and photographer living in Southern New Hampshire with her husband and four children. She received her MFA from Lesley University and her work has appeared in Family Circle Magazine and a variety of literary journals. Her personal essays and blog can be found at www.thefrozenmoon.com.

Ruth Holzer’s poems have appeared in Southern Poetry Review, Journal of New Jersey Poets, The South Carolina Review, Connecticut River Review, Slant, and THEMA, among others. A six-time Pushcart nominee, she is the author of the chapbooks The First Hundred Years, The Solitude of Cities, and A Woman Passing.

Georgette Kelly is a playwright based in Chicago and New York. She received the inaugural Hope on Stage Playwriting Award and is a resident of Chicago Dramatists. Her work has appeared on The Kilroys List and at The Kennedy Center, NNPN, The Source Festival, terraNOVA Collective, Taffety Punk, Diversionary Theatre, and DCASE. Georgette’s plays include: Ballast, In the Belly of the Whale, I Carry Your Heart, F*ck la vie d’artiste, how to hero, and an adaptation of Jeanette Winterson’s Lighthousekeeping. She has been a finalist at the O’Neill, The Lark, the Goodman Playwrights Unit, and the Alliance/Kendeda Playwriting Competition. GeorgetteKelly.com.

Michael Klein is a member of the resistance. New poems will appear in the next issue of The Literary Review and his current book is When I Was a Twin. He teaches in both the MFA Program at Goddard College and Hunter College in New York, where he lives with Ruby, the fearless French bulldog, and Andrew, the husband.

Matthew Mitchell is a sophomore Creative Writing major at Hiram College. In 2016, Matthew was awarded the Richard C. and Jo Ann Murphy Underwood Memorial Award for Journalism. He is a winner of the Barbara Thompson Fiction Contest as well as the Vachel Lindsay Poetry Prize. His poem “Jo” was a national finalist in the Lex Allen Literary Festival. In 2017, Matthew won the Gilmer Kroehle Creative Nonfiction Contest. He also presented his paper “Bruce Bechdel’s ‘Happy Death’ in Fun Home” at the Midwest Popular Culture Association Conference in St. Louis.

Bill Neumire's first collection, Estrus, was a semi-finalist for the 42 Miles Press Award. His recent poems have appeared in the Harvard Review Online, Beloit Poetry Journal, Salt Hill, and Pittsburgh Poetry Review. He reviews books of contemporary poetry for Scout, Vallum, and Verdad, where he serves as poetry editor.

Keenan Norris’s chapbook by the lemon tree will be published in September. He’s editing a special issue of Words, Beats & Life due out this summer and also has pieces forthcoming in Alchemy of the Word, Boom: A Journal of California, and Oxford Bibliographies in African-American Studies. Keenan is faculty at Goddard College and San Jose State University.

Ryan Schaufler received a BFA from California Institute of the Arts in Acting. Not only has Mr. Schaufler worked as a professional actor for over 20 years, he is also a special education teacher, theatre teacher, playwright, director, photographer, artist, and father. His photography can be seen in Rattle’s Ekphrastic Challenge, Pithead Chapel (2017 September Cover), The Perch, and Cream City Review among others. His short play will be published in the forthcoming Southern Indiana Review. In addition, he is the founder of the online literary site www.twitterization.wordpress.com where some of his writing and photography can be viewed.

Emily Shearer is an ex-pat writer exploring the weight of the word “home.” Recently back from three years in Prague, Czech Republic with her husband and three children, she now finds herself in Texas teaching yoga for creative spirits. Her poems have been nominated for a Pushcart Prize, shortlisted for the Judith B. McCabe Poetry Prize, and awarded University of Houston’s 2017 Robertson Prize (runner-up). Her poetry has been published in Ruminate, the bookends review, Crow Hollow Books, The Tishman Review, and All We Can Hold:  poems about motherhood, among others. She was featured in the inaugural issue of Minerva Rising, where she now serves as the Poetry Editor.

Robert Joe Stout has written about Mexico for a variety of publications, including America, The American Scholar, and Notre Dame Magazine. He lives in Oaxaca, has served on human rights delegations there and has traveled extensively throughout the country. His most recent books are Hidden Dangers from Sunbury Press and Where Gringos Don’t Belong from Anaphora.

Joel Tomfohr holds an MA in English with an emphasis in Creative Writing from the University of Nebraska-Lincoln, and an MFA in Creative Writing from Mills College in Oakland, California. He was an emerging writer in residence at the Wellstone Center in the Redwoods in Soquel, California in August 2015. He has also been a resident at The Headlands Center for the Arts in Marin, California, The Cultural Center in New York Mills, Minnesota, and The Vermont Studio Center in Johnson, Vermont. His fiction has appeared in BULL, Hobart, Your Impossible Voice, sPARKLE & bLINK, and 580 Split.

Gerald Yelle’s books are The Holyoke Diaries (Future Cycle Press), Evolution for the Hell of It (Red Dashboard Press), Mark My Word and the New World Order (The Pedestrian Press), and Restaurant in Walking Distance and Everything (Cawing Crow Press). He teaches high school English and is a member of the Florence (Massachusetts) Poets Society.