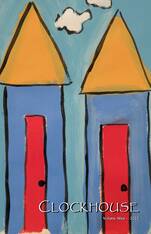 Contributors
Michelle Acker is a Florida-based poet with an MFA from Hollins University. Her work has been published or is forthcoming from Flock, Scoundrel Time, The Florida Review, FreezeRay, and elsewhere, and in the anthology Rewilding: Poems for the Environment by Flexible Press. Her website is michelleackerwriter.com.

Sherrill Alesiak’s poetry and fiction have appeared in publications such as Alligator Juniper, The MacGuffin, Kalliope, Princeton Arts Review, The Owen Wister Review, Blueline, 34th Parallel and in the poetry anthology Eating Her Wedding Dress.

Bonnie Billet started writing in junior high school and continued until she was in her thirties. She was published in Poetry. She began writing again in her late 60's and has been published in 42 publications in the last 3.5 years.

Carl Boon is the author of the full-length collection Places & Names: Poems (The Nasiona Press, 2019). His writing has appeared in many journals and magazines, including Prairie Schooner, Posit, and The Maine Review. He received his Ph.D. in Twentieth-Century American Literature from Ohio University in 2007, and currently lives in Izmir, Turkey, where he teaches courses in American culture and literature at Dokuz Eylül University.

Daniella Deutsch is a 26 year old originally from Los Angeles, California. She migrated to New York as soon as she could, currently studying at NYU’s Silver School of Social Work. She is also a proud preschool teacher at Beginnings Nursery School. Daniella has had three pieces published by online literary journals: Ink and Voices, Little Death Lit, and 5x5 Literary Magazine. She also had a piece published in the most recent issue of Gargoyle Magazine. Lastly, her debut book of poetry titled all the things my mother never told me came out in December of 2020.

Tom England lives and teaches in the North West of England. His writing has been published in numerous literary journals, including Confingo, Atlas & Alice, SomeRoastPoet, and Smeuse.

Chapman Hood Frazier's book, The Lost Books of the Bestiary, a finalist for the V Press LC 2020 Poetry Competition, will be published in winter 2022. His work has appeared in The Virginia Quarterly Review, The Southern Poetry Review, The South Carolina Poetry Review and other small press publications. His work has been nominated for a Pushcart Prize. In addition, he has published interviews with contemporary American poets, Rita Dove, Nikki Giovanni, Ted Kooser, Gregory Orr, and Northern Irish poets, Medbh McGuckian and Sinead Morrissey in The Writer's Chronicle, Shenandoah and Agni Online. He lives with his wife, founder of The Sunrise Learning Center, in Rice, Virginia.

Mikki Gillette is a trans woman playwright, whose work depicts the trans experience in all its juicy, dramatic richness. Her play The Queers was produced by Fuse Theatre Ensemble in spring 2022. Her show Mimetic Desire is scheduled for production by the Pittsburgh Classic Players in winter 2023. Mikki’s work has been produced or developed at Artists Rep Theatre, Transformation Theatre, the OUTwright Theatre Festival, Profile Theatre and Post5 Theatre. Her short work has been published in Rushing Thru the Dark, Barely Seen and Fleas on the Dog. Learn more at: mikkigillette.com.

Marina Hill has a published poetry collection in addition to over a dozen publications of other works. With a BA in English from Baruch College, she founded and is the Editor-in-Chief of an online historical magazine, Periodically Dramatic. She always stays creative but never stays in one place for too long.

Dan Jacoby is a graduate of Fenwick High School, St. Louis University, Chicago State University, and Governors State University. He has published poetry in several fine publications. He is a former educator, steel worker, and counterintelligence agent. He was born in 1947 on the second floor of a cold water flat at 55th and Halsted, Chicago. He is the author of the book Blue Jeaned Buddhists.

Marilyn E. Johnston is the author of two full collections of poetry published by Antrim House Books, Silk Fist Songs (2008) and Weight of the Angel (2009). Her chapbook, Against Disappearance, won publication as a Finalist for the 2001 poetry prize of Redgreene Press, Pittsburgh. Her work has appeared in numerous journals including MacGuffin, South Carolina Review, Poet Lore, Worcester Review, and Rattle and has garnered six Pushcart Prize nominations. She has enjoyed two consecutive long-term careers, one in Cigna corporation communications and one in public library work which included poetry programming for the public. She retired from the library in 2017.

Stefanie Kirby is a Pushcart-nominated poet residing along Colorado’s front range. She studied poetry at Lighthouse Writers Workshop and has taught writing to middle and high school students. Her work appears or is forthcoming in Rust+Moth, Dialogist, Plumwood Mountain, and elsewhere.

Morgan Liphart's work has appeared in anthologies and journals across the United States and England, such as the University of Oxford’s Literary Imagination, The Comstock Review, and Third Wednesday. When she's not writing, she enjoys her career as an attorney and adventuring in the wild spaces surrounding her home in Denver.

Katharyn Howd Machan’s most recent publications are A Slow Bottle of Wine (The Comstock Writers, Inc., 2020) and What the Piper Promised (Alexandria Quarterly Press, 2018), both winners in national chapbook competitions. Her poems have appeared in numerous magazines, anthologies, and textbooks, including The Bedford Introduction to Literature and Sound and Sense. A professor in the Writing Department at Ithaca College in central New York State, she served as Tompkins County’s first poet laureate. She belly dances.

Isabel Mader is commonly full of rage, snacks, and unfettered joy. She lives in the woods with her growing family. She holds an MFA and has the hood in her closet. Some of her work can be found at Menacing Hedge, Blast Furnace Press, Broken Tooth Press, Lonely Whale Memoir: An Anthology, and Concrete Magazine.

Andrew Shattuck McBride grew up in Volcano, Hawaiʻi, six miles from the summit of Kīlauea volcano. He is co-editor of For Love of Orcas (Wandering Aengus, 2019). His poem “I Was Happy as an Ant” was a semi-finalist for the 2017 Crab Creek Review Poetry Prize. His work appears in Black Horse Review, The Cabinet of Heed, Crab Creek Review, Empty Mirror, and Floating Bridge Review.

Seth McNeill is a playwright and theatre artist more or less from Mississippi. His plays deal with isolation and social alienation, repressed generational trauma, and whiteness through a quasi-absurdist, darkly comic lens. He is currently developing a play about internet rabbit holes and far-right radicalization, originally commissioned by Gingold Theatrical Group. His other plays have been developed and/or presented at Fresh Ground Pepper, Dixon Place, Fault Line Theatre, Amios NYC, and the Hambidge Center. He has been named a semi-finalist for the O’Neill, the Shakespeare’s New Contemporaries Prize, and Primary Stages ESPA Drills.

Philip Memmer is the author of five books of poems, most recently Pantheon (Lost Horse Press, 2019) and The Storehouses of the Snow (Lost Horse Press, 2012). His work has appeared in such journals as Poetry, Poetry Northwest, Poetry London, and Mid-American Review, as well as in Ted Kooser's "American Life in Poetry" column and the Library of Congress's "Poetry 180" site. He lives in upstate New York.

Makena Metz (she/her) is an LA native who writes fantasy, sci-fi, and magical realism for the page, screen, and stage. She is getting her MFA in Creative Writing from Chapman University and is a proud member of DGA, ASCAP, and the SCL. Makena is an alum of the Institute for American Musical Theatre (IAMT) Creators Program and New Musical Inc’s CORE Curriculum for Musical Theatre Writing. Follow her on twitter or instagram @MakenaMetz, FB @makenametzwrites, and find her work on Coverfly or NPX!

Sharon Lopez Mooney says words are her heartland. Her intention is to put her shoulder to the wheel of change and hope with all she writes. A retired Interfaith Chaplain, she lives in Mexico, has ties to family in California. Mooney received an CAC Grant for rural poetry series; co-published an arts anthology; produced poetry readings. Her poems are published in various journals including: The MacGuffin, The Muddy River Poetry Review, NewVerse News, The Avalon Literary Review, International Adelaide Magazine, Galway Review, The Ricochet Review, and anthologies: Calyx, Songs to the Sun, Cold Water, Smoke & Myrrors (UK), & others.

Lisa Richesson is an author living in Seattle, Washington. She has been a book reviewer, travel essayist, memoirist and nonfiction writer, specializing in issues of women and mental health and the history of London. She strongly feels that non-fiction is more interesting than fiction, and follows the thought of Christopher Isherwood, who said: “Why invent when life is so prodigious?” Life indeed is prodigious and everyone has a story worth hearing and recording.

Sam Sherman is the author of a nonfiction book, Ipswich: Stories from the River’s Mouth, about the history of Ipswich, Massachusetts, as well as a jumble of stories, screenplays, essays, and poems. She lives and writes in New England.

Sarah Stern is the author of We Have Been Lucky in the Midst of Misfortune (Kelsay Books, 2018), But Today Is Different (Wipf and Stock, 2014) and Another Word for Love (Finishing Line Press, 2011). Nominated for a Pushcart Prize in 2019 and 2018, she is also a five-time winner of the Bronx Council on the Arts' BRIO Poetry Award. You can see more of her work at www.sarahstern.me.

Michelle Valois’ work has appeared in The Massachusetts Review, TriQuarterly, The Baltimore Review, Pank, Brevity, The Florida Review, and more. Her first book, My Found Vocabulary, was published in 2016. Michelle lives in western Massachusetts with her partner and their three children, and teaches at a community college.

Elinora Westfall is a lesbian writer of fiction, poetry, stage and screen from the UK.